Here is a fun make-ahead method for baked chicken breasts in parchment paper. It's so easy and healthy, yet looks impressive. Make the chicken packets a few hours ahead and bake them when you are ready, or right after assembling. Each packet is like getting your own present to open. Let me show you how to make them.

Baking chicken in parchment is easy. Place boneless, skinless chicken breasts atop a pile of thinly sliced vegetables spread with a mixture of whole grain mustard, herbs and olive oil, then seal the packet and bake.

The chicken and vegetables steam inside the parchment in about 15 minutes in a hot  425° oven. Best of all, you can make the packets ahead of time and refrigerate for several hours, then bake when you are ready for dinner.

Assemble Packets Ahead for Busy Weeknights

Baking chicken in parchment is great time-saving method for family dinners during a busy week. Just assemble the packets the night before. When you walk in the door, take them out of the refrigerator to warm up, about 30-45 minutes, then bake. Serve with a salad and you are good to go.

How to Make Parchment Packets

Parchment paper is widely available. Find rolls of baking parchment (made by Reynolds or others) along side of foil and plastic film in most grocery store aisles. Note: parchment is not wax paper. Parchment will come either white or unbleached and may say either non-stick or silicone on the box.

To make packets, cut a piece of parchment 18″ long. Standard rolls are 15″ wide. Fold and crease the sheet in half to make a 9″ x 15″ piece. From here, cut a wide, fat half-heart shape with scissors. This will become your packet.

When I made these for the post, the chicken breasts at the market were huge, so I split them in half to make two portions of the right size. To slice larger chicken breasts into cutlets, see photos. If you have smaller chicken breasts, say 5-6 ounces each, you can simply use them as is or pound them a little flatter at the thick end. That helps them to cook evenly.

Next, cut carrots into thin matchsticks. You can use a knife, a julienne peeler or a julienne slicer. Clean the leek and slice crosswise into thin rings or half moons. With the parchment heart open like a book, layer the vegetables, then chicken into the middle, season, and spread with a thin paste of olive oil, mustard and fresh thyme leaves.

Seal the packets by folding and tightly creasing the edges around the heart every few inches until completely enclosed and sealed.

You can place the chicken packets in the refrigerator several hours ahead of time or bake right away. If you refrigerate the packets, allow then to stand at room temperature for approximately 45 minutes to get the chill off for better baking.

Bake Your Chicken Packets and Serve

To bake the chicken packets, pre-heat the oven to 425 degrees. Place the packets on a metal baking sheets. Bake for approximately 15 minutes. Packets will be browning at the edges. Remove from the oven.

To serve, place packets on plates and slit open the parchment packets, being careful of the hot steam. Slide chicken and vegetables out onto the plate and enjoy. 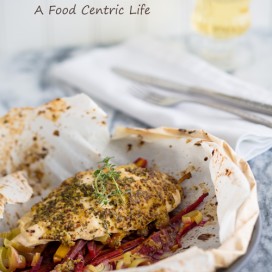 Sally Cameron
Baking chicken in parchment is easy, healthy and fun if you have never tried the technique. The chicken and vegetables steam to perfection inside the parchment. Make the packets a few hours ahead and refrigerate, then bake when you are ready. Double or triples easily!
5 from 1 vote
Print Recipe Pin Recipe
Prep Time 15 mins
Cook Time 20 mins
Total Time 35 mins
Course Main Course
Cuisine American
Servings 4
Calories 228 kcal