The Romance of Rome

Our First Trip to Italy

Back from our first trip to Italy, it’s hard to know where to begin. I hoped to blog while we were traveling, sharing each day’s adventures and photos but quickly discovered that was impossible.  There was no time with the jam-packed itinerary we planned. We were on the run from morning to night exploring, eating wonderful food, drinking great wine, shopping and shooting photographs. So where to start? In Rome… 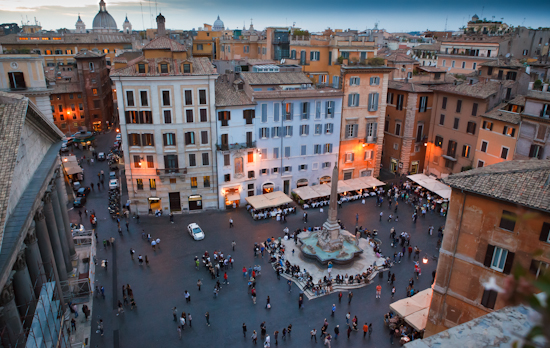 We arrived in Rome midmorning. After reading stories about driving in Rome we were lucky to have a friend pick us up at the airport. I am firmly convinced that you need a NASCAR license to drive in Rome. Hard to believe that cars have any side mirrors left. At times I just held my breath or closed my eyes, but not for long as there was so much to see. With thousands of years of history everywhere you turn, it’s obvious why Rome is called The Eternal City. It’s simply amazing.

Too early to check in, we dropped our luggage at the Albergo Del Senato (great place to stay) and walked a few steps to the domed Pantheon, the best-preserved example of ancient Roman architecture in the world. It’s truly mind-blowing to stand in a place more than 2000 years old and imagine those who have been there before you.

Outside, the Piazza della Rotunda was bustling with people enjoying the cafes, hanging out by the fountain and the sunshine of a beautiful Roman morning. 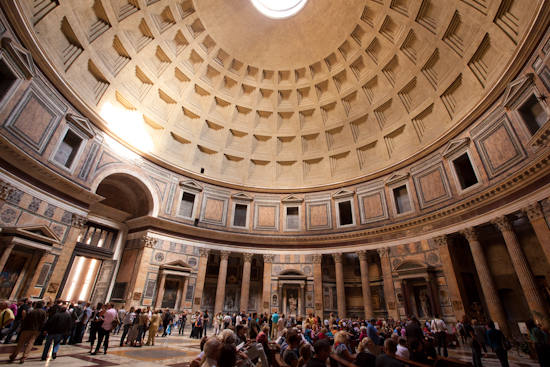 We walked over black cobblestone streets to Piazza Navona trying to gain our bearings after being on an airplane for so many hours. Tired and needing a snack, we stopped at a sidewalk café for some pizza and a glass of wine.

Roman style pizza has a very thin, almost cracker like crust. It’s not piled with tons of stuff like American pizza; just a few simple ingredients like cheese, tomatoes and herbs or maybe mushrooms or pancetta. Relaxing in the sun on the piazza we knew this was the start of a great trip. 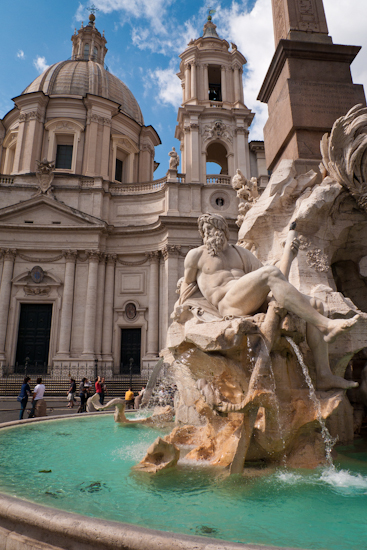 On the way back to our hotel we passed the renowned gelato shop, Giolitti. After three generations, they are still producing incredible gelato from secret family recipes. The store was jammed with people. Italians eat ice cream at all times of the day. I’ve never seen a city, a country so obsessed with ice cream!

We bought a ticket from the cashier (which is how they do it) and headed to the gelato counter. A dizzying display of flavors made it agonizing to choose. I gave the attendant two choices and was quickly prompted via hand gestures to choose a third flavor.

When eating gelato in Italy you choose three flavors for your dish or cone. You are not allowed to do otherwise. We made our choices. Deep, rich, intense flavors of silky smooth gelato slid across our tongues.  Heavenly. 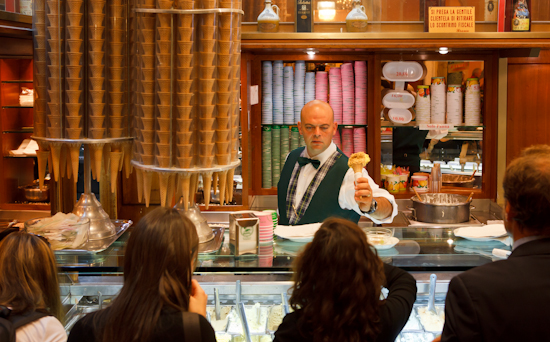 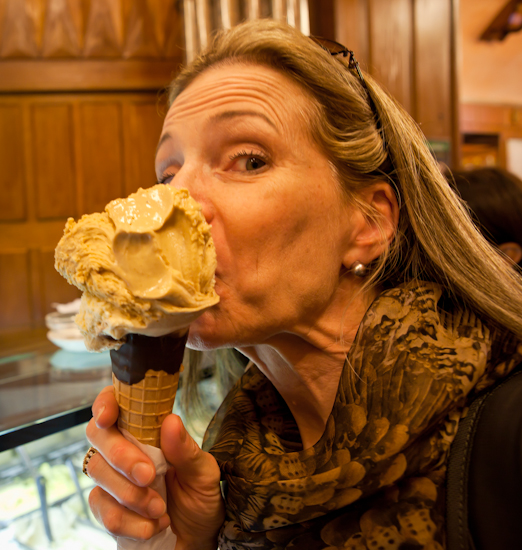 Continuing our walk, we also passed what we might call a “deli” where you could purchase food to take home. Displayed were beautiful platters of enticing, fresh foods that just made you drool peering in the window. Everything was so beautifully prepared and presented it could have been jewelry. 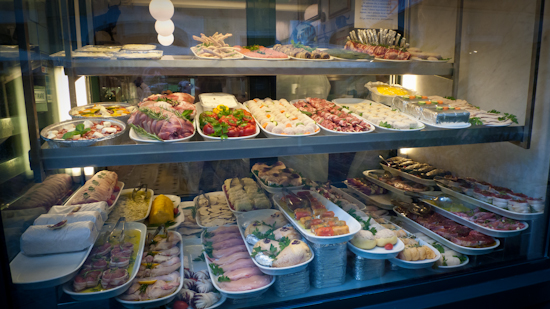 Sunset of our first night in Rome we discovered the lovely roof top bar at our hotel. Enjoying a glass of wine and the view of Rome overlooking the Pantheon, we were mesmerized. Music was wafting up from street musicians below, the sky was turning rosy shades of peach, gold and purple and we were immersed in the history and architecture surrounding us.  It was magical. 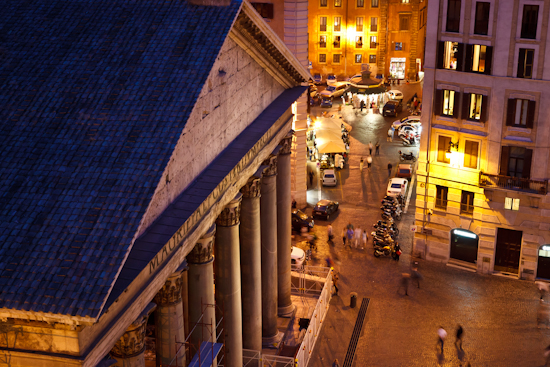 Dinner that evening was at Hostaria Costanza. Hard to find and not much to look at from the outside, once inside we were seated in the ancient remains of the Pompeo Theater, more than 2000 years old. We were early, and the restaurant soon filled with Italian families and locals, a good sign.

Ordering is mostly done in single plates in Italy.  Menus are broken down in to appetizers, primi (first course), secondi (second or main usually) contorni (side dishes and salads), and dolce (dessert). We enjoyed tender artichoke (carciofi) ravioli, crepes with mushrooms and truffles (funghi e tartufo), grilled small lobster like crustaceans (scampi alla griglia) and filet of sole (sogliola) with lemon and capers. Everything was absolutely fresh, simple and delicious.  That would become the theme of eating our way through Italy. Fresh, simple and delicious. 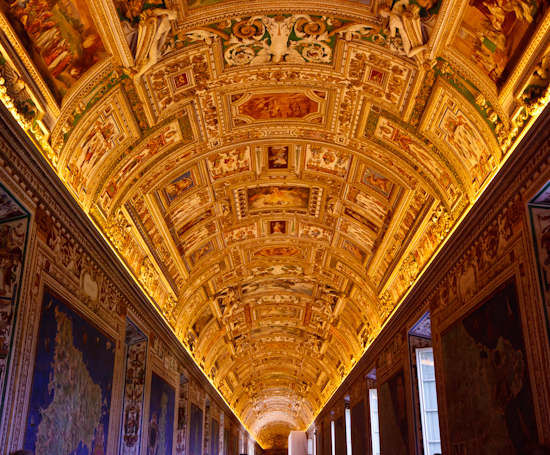 The following day we toured Vatican City with a private guide for an amazing view of history, art, architecture and of course St. Peters cathedral. Overwhelming is a good word for Rome. We walked until we could not put one foot in front of the other.

Exhausted, we collapsed at restaurant Pier Luigi for lunch, thanks to a recommendation from Susan Spungen’s interview (who did the food for Eat, Pray, Love) in the New York Times. 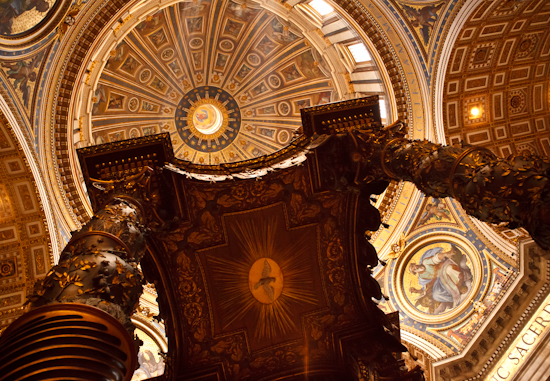 Insanely expensive in the US, they are occasionally found in high end restaurants (at a high price) when they are in season.  This simple dish was profoundly incredible; we split a second plate. The waiter must have thought we were crazy. I confess, I am a white truffle addict. Later, happy and full, the waiter walked by and asked wryly “more truffles madam? That was enough, just for today. 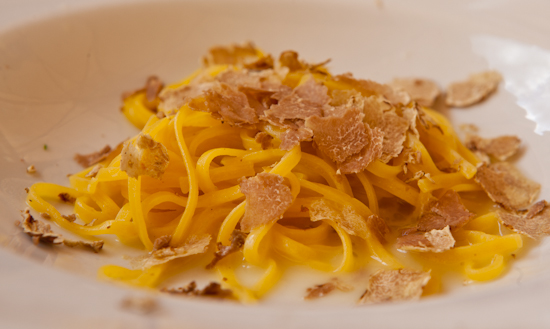 Dinner that evening was at Sangallo ai Coronari, a charming little restaurant (and recommendation from the Susan Spungen article), with a lovely outside patio. We enjoyed fresh pasta with asparagus and filet of sole, stuffed, rolled, steamed and served with a white celery sauce with sautéed spinach. It was delicious. 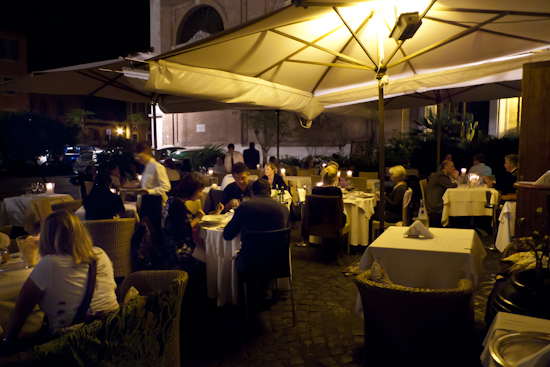 With a window into the kitchen, I intently peered in to watch the chefs at work. When the head chef saw me he waved me to come in.  I immediately left the table and headed for the kitchen. My husband is used to this behavior.  The chefs had just made a classic Italian dish – Pasta All’Amitriciana – and handed me a taste.

Made with guanciale, unsmoked Italian style bacon traditionally made with pork jowls or cheeks. It had a rich flavor and worked beautifully over the tender pasta. 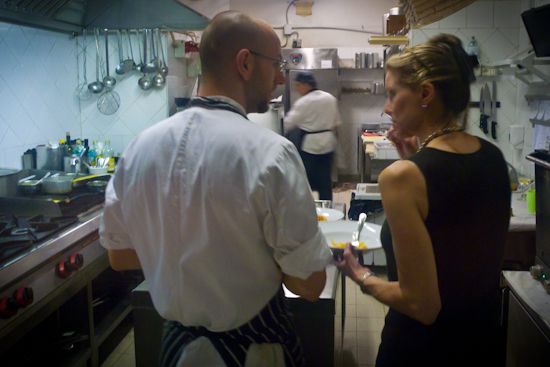 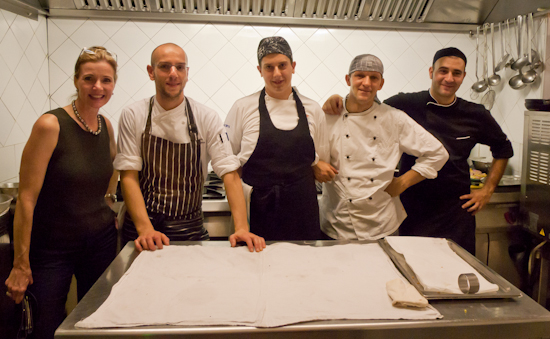 Across the alley a small gelateria under a staircase beckoned. We couldn’t resist gelato for dessert. In Italy, skipping dessert must be a crime. Waiters look at you like you are crazy if you do not order dessert. The gelato maker himself was manning the counter. We enjoyed intensely flavored pistachio, deep chocolate and an amazing creation of white peach and lavender. I must try to re-create that one at home. 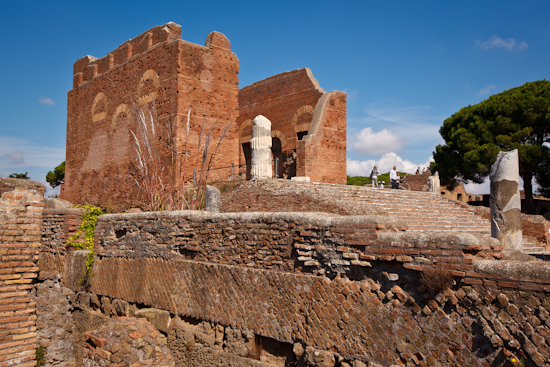 Day three in Rome found us exploring Ostia Antica, the harbor city of ancient Rome dating back more than 1000 years BC. Once a city of 100,000 people, it’s amazingly preserved. We found an area that must have been ancient restaurant or bar. 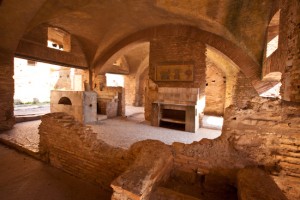 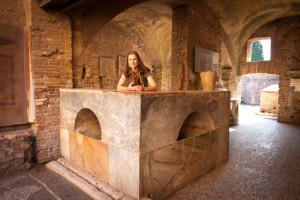 Lunch was in a small village we walked to from Ostia Antica. For the first time we had a special hand rolled pasta called pici (pee-shee). The shape is like thick spaghetti but hand rolled rather than extruded, and  it’s a ton of work to make.  We enjoyed our pici with shellfish, wine and salad, and of course a coffee afterwards. Italians might drink a cappuccino for breakfast but the rest of the day coffee means straight espresso.

All of a couple of tablespoons in a demitasse cup. A little bitter and sometimes kind of thick, we quickly got hooked on drinking coffee this way.  A tasty little pick-me-up for the afternoon and something I am now doing at home with our espresso machine. Memories of Italy in each little cup. 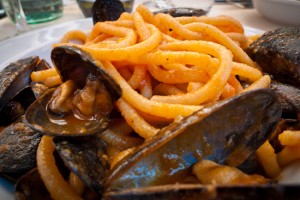 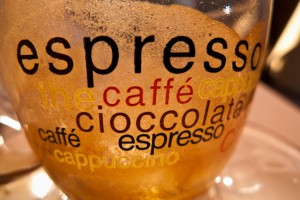 As the day came to and end we wanted to get some classic shots of Rome; the coliseum at dusk. We camped out and waited for the light to change. Photos done, we were off for our last dinner in Rome, for now. 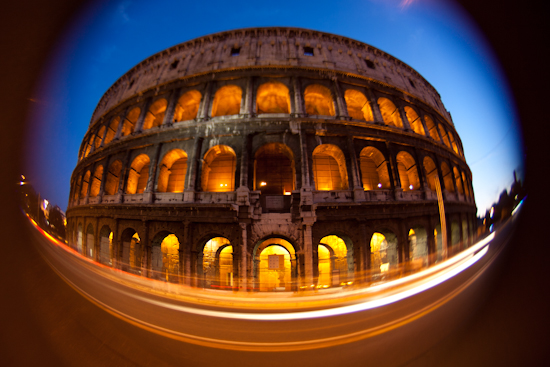 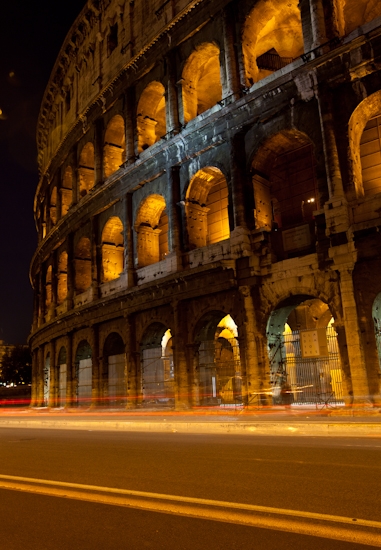 In the morning we had breakfast at the hotel, a welcoming and traditional buffet of yogurt, cereals, sliced meats and cheese, tomatoes, toast, jams and pastries, plus cappuccino and juices. We picked up a car and started the 5-6 hour drive along the Italian coast to Cinque Terre or “Five Lands” – the famous five villages along the sea.