With Valentines Day around the corner, my gift to you is this gluten-free bittersweet German chocolate brownie recipe to bake for your loves ones. It’s even dairy-free! I baked a batch today and the house smells heavenly. They are just the right combination of fudgy and cakey in brownie-speak.

Inspired by my dad’s favorite cake, my German chocolate brownie recipe is made with bittersweet chocolate, unsweetened shredded coconut and coconut oil, and chopped pecans. These brownies have just 3 tablespoons of teff flour and teff has a great affinity for chocolate.

Considered the smallest grain in the world, teff is the size of a poppy seed. It is native to Ethiopia and has been a dietary staple for thousands of years. Teff has a nutty, mild taste and packs a healthy punch with protein, fiber, minerals. While these brownies use teff ground into flour, whole grain teff can be used for breakfast porridge, added to stews, pilafs, mixed into baked goods and even mixed into veggie burgers. Think of it like quinoa.

I tested German chocolate brownies with coconut sugar and sucanat, an unrefined sugar containing all of the natural molasses giving it a golden color. It is a good replacement for brown sugar in baking and the granular texture is melts into the batter. Alternatively, use golden brown sugar.

The roots of German chocolate trace to American baker Samuel German who developed a dark baking chocolate for the Baker’s Chocolate Company in 1852. The chocolate known as German’s eventually dropped the letter s. The original cake recipe was created in 1957 by a Texas homemaker. Whatever the roots, bake a batch of bittersweet German chocolate brownies as a Valentine’s treat for your friends and family.

Looking for another chocolate treat for your family? Try this decadent chocolate sorbet. 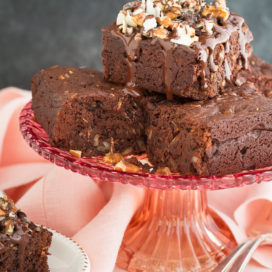 What is Teff Flour? One of the tiniest seeds in the world, teff is an ancient, gluten-free grain native to Ethiopia. Teff has a mild nutty flavor that works well in recipes calling for chocolate. It’s high in plant-based protein, calcium and high in resistant starch, a healthy and unique form of fiber. For another way to use teff flour, try the teff on page xx. Purchase teff flour at health-oriented markets and online. Store in the refrigerator once opened, for extended freshness.