Humble cabbage becomes a savory side dish in just minutes. It’s nice along side roast chicken or salmon for St. Patrick’s Day dinner. For a great weekend breakfast, try it topped with a poached egg. Here's my recipe for braised cabbage with leeks and bacon. With a few minutes of easy prep work, this side dish will cook in about 10-12 minutes. I’ve made it several times this week and loved how fast it went.

Cabbage and bacon is traditionally associated with Irish family meals. As many people grew their own vegetables and raised their own pigs, ingredients were readily available. I’ve taken a bit of modern leeway including cabbage along with carrots (also traditional), leeks instead of onions, and thyme. Instead of boiling the cabbage I braise it in a little broth.

Cabbage: Not Just for Coleslaw

Cabbage is a member of the cruciferous vegetable family, so it’s good for you. Cabbage is rich in antioxidants, phytonutrients, vitamin K (good for your bones), vitamin C, B6, folate and many important minerals. It’s also a good source of fiber. Besides in this warm side dish, cabbage is good in salads, added to vegetable soups and shredded for tacos, even for green juices. However you add it, get cabbage into your healthy diet.

What About Corned Beef and Cabbage?

Though cabbage has long been an Irish food, corned beef only became associated with St. Patrick’s Day around the turn of the century. It has become and Irish-American tradition. In the “old country”,  the original dish was cabbage and bacon.

Treat your family to an easy, tasty, modern day version of an Irish classic for St. Patrick’s Day dinner. And for another recipe to serve on St Pats, try this Cauliflower Colcannon. 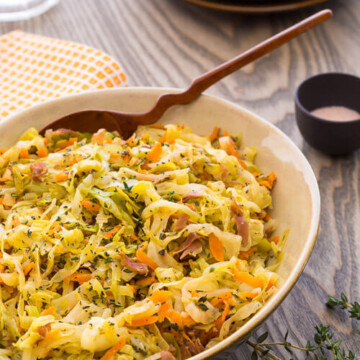 Braised Cabbage with Leeks and Bacon

Sally Cameron
This is so good you will want to serve it more often than St. Patrick’s Day. It’s nice along side roast chicken or salmon any time of the year. Try it topped with a poached egg for weekend breakfasts. To make this vegetarian you can skip the bacon, and to make it vegan, use vegetable broth.
No ratings yet
Print Recipe Pin Recipe
Prep Time 7 mins
Cook Time 10 mins
Course Side Dish
Cuisine Irish
Servings 4
Calories 131 kcal