Here's a creamy corn chowder recipe great for the end of summer or in winter using frozen corn. I like to make it at the end of summer when fresh corn is available. Golden kernels and pale, soft green husks, ready to be enjoyed in many ways. Besides corn on the cob, corn chowder is an as easy way to enjoy corn, and this recipe is dairy-free.

Real chowder by definition includes dairy, bacon and potatoes. To make this corn chowder recipe dairy-free I've used canned coconut milk, so it's still rich and creamy. If you enjoy dairy, you can substitute dairy half and half. The gold potatoes and crisp bacon as a garnish goes with tradition, but if you want to keep this vegan, skip the bacon.

Serving tip: serve crisp bacon crumbles on the side so people can garnish or not.

You might wonder, is corn a vegetable, grain or fruit? Depending on how it's eaten it has multiple identities. Read more about it here. Eaten like this, corn is considered a starchy vegetable or whole grain.

Corn Off the Cob

All debates aside, fresh, sweet corn makes a wonderful chowder that is a treat for the end of summer.  In winter, use frozen, thawed, organic corn. You can preserve summer's bounty by buying extra corn, slicing it off the cob and freezing it while prices are good.

Strip the husks and silk from fresh corn on the cob. Cut the cobs in half across the center. Stand co halves on the flat end, and with a sharp knife, slice the kernels off the cob. Five cobs should yield about 4 - 4 ½ cups of kernels.

I recommend buying non-GMO or organic corn only. Much of the corn grown this country is GMO. You do what is best for you. For a terrific site with more information on GMO foods, check out the Non-GMO Project organization site.

How to Make Chowder

When you have the kernels ready you can start the chowder. Sauté the onion, celery, leek and garlic in a little olive oil. Add the herbs, thyme and fennel, and corn. Add broth, coconut milk and simmer a bit and you are ready for a terrific bowl of corn chowder. It gets thick when made ahead, but is easy to thin with a little extra broth.

Fennel pollen is a very potent form of dried fennel. If you love  he flavor of fennel (ayou will love fennel pollen. Some call it the spice of the angels. Tiny yellow flowers are collected then screened to get just the pollen.

Fennel pollen is native to the Mediterranean and grown here in California. If you can't find it (and it can be pricey), use ground fennel seed. Use it anywhere you would use fennel, in soups, stews, with chicken and pork, or with vegetables.

You can make this soup on a Sunday afternoon in about an hour or less. It will hold for 4 days in the refrigerator, so you can enjoy it during the busy week ahead. Serve with a tossed green salad for a hearty, healthy, fast dinner. It gets very thick after sitting in the fridge so you might need extra broth to thin it down. 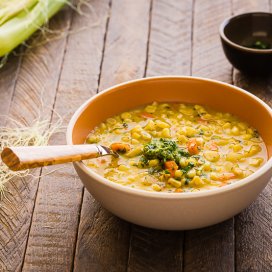 Sally Cameron
Golden corn kernels with vegetables and herbs, this chowder gets its thick creamy texture from coconut milk, not dairy milk. It's gluten-free and dairy-free. Make it ahead on the weekend for a busy week ahead. Chowder will hold 4 days in the refrigerator. If you enjoy crisp bacon it's the perfect garnish.
5 from 1 vote
Print Recipe Pin Recipe
Prep Time 15 mins
Cook Time 15 mins
Total Time 30 mins
Course Soup
Cuisine American
Servings 4 to 6
Calories 541 kcal

This chowder gets very thick when refrigerated. You will need a little extra broth to thin it down. Or to feed extra hungry mouths, use more broth and make it more of a soup, which will stretch the quantity of servings.