Soybean succotash is an easy and healthy recipe that works as we transition from summer into fall. Sweet corn, red bell peppers and my swap of organic whole shelled organic soybeans instead of lima beans. Serve it with roast chicken, seafood or anything off the grill.

Popular during the Great Depression for it’s relatively inexpensive ingredients, succotash is traditionally made with corn, sweet peppers and lima beans. While I love corn and red bell peppers, I’ve never grown to like limas. OK, that was polite. I can't stand them, hence my swap for edamame.

Nutritionally speaking, soybeans are high in protein, folate, vitamin K, calcium, magnesium, iron and fiber, plus important minerals. Additionally, their protein is complete protein, containing all of the essential amino acids our bodies can only get through diet.

While soybeans can make a healthy contribution to many diets, this legume is not for everyone. Soybeans are on the “most controversial” dietary lists for a variety of reasons but there is much to consider. Read this article for more info.

If you are allergic to soy, this is not a dish for you. Swap the soybeans for limas or fava beans.

Healthy Versus Unhealthy Forms of Soy

This edamame succotash recipe uses whole soybeans. As with most foods, the whole form is healthy. It's the processed forms of soy that are a big problem, health-wise. Processed forms like soy protein isolate (SPI) and TVP, textured vegetable protein should be avoided.

So should mass market soy “vegetable” oil that is GMO and processed with high heat or chemicals. These are unhealthy forms of soy.

Go organic when buying soybeans and corn. Conventionally grown are probably GMO (genetically modified). Not a healthy choice. And red bell peppers are on the Dirty Dozen list for produce with high levels of pesticides. For soybeans, buy only shelled, fresh or frozen organic. The frozen are handy to stock in your freezer. The same is true of corn.

Drop frozen soybeans into boiling water for about 4 minutes. Corn can be cooked fresh on the cob for 3 minutes in boiling water, or use frozen, thawed and cooked kernels.

Chop and saute a bell pepper (for help, see photos below) along with sliced leek, garlic and herbs. In quick time, you have a delicious side dish to serve with chicken, fish, burgers or about any main dish.

How to Chop Bell Peppers Step-by-Step

I've been enjoying edamame succotash for lunch mixed with cooked quinoa. It's great! I discovered this after we finished shooting the photos so unfortunately we don't have a picture.

It's terrific for a high protein, light, healthy vegan lunch. It's good warm or cold. Mixed with the quinoa, it also makes for a heartier side dish to serve more people.  If you enjoy bacon, crisp bacon crumbles are a nice add. 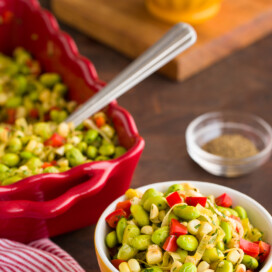 Sally Cameron
A modern update to a traditional side dish, my succotash uses whole soaybeans instead of lima beans. Make this in summer with fresh corn, or in the winter with frozen kernels. And buy organic. For another dish, add cooked quinoa. It makes a nice vegan dish, high in protein and flavor. Great for lunch or as a heartier side dish.
No ratings yet
Print Recipe Pin Recipe
Prep Time 15 mins
Cook Time 10 mins
Total Time 25 mins
Course Side Dish
Cuisine American
Servings 6
Calories 142 kcal

Cook the Corn (or thaw if frozen)

Next Drop in Edamame