Step away from the box – boxed chicken broth, that is, and learn to make homemade chicken broth. Its hands down, the best. Simmer meaty chicken pieces and bones for 12-24 hours with carrot, onion, celery and herbs, then strain, cool and freeze. The house will smell heavenly and you will have “liquid gold” in the freezer to use for fantastic soups, stews, risottos and just sipping.

Making homemade chicken broth is easy. Most of the time is hands off while it simmers on the stove. The big reason to make it is taste and control of ingredients. Homemade tastes so much better than anything store bought.

Store broths are usually filled with sodium for taste and as a preservative, while homemade has zero. If you read the labels on most store brands, you will be shocked at not only the sodium content but other ingredients (like sugar). Not healthy.

Is it broth or stock? These days the terms are used interchangeably. Traditionally, chicken broth is made with meaty chicken pieces and vegetables and chicken stock is made from just bones and sometimes vegetables.  I use a combination for the best flavor and nutrition.

What Kind of Chicken?

When making homemade stock I use a whole, cut-up organic chicken or bone-in chicken thighs and leg pieces. Adding chicken feet provide extra collagen and great body and nutrition to the broth. Check with your butcher and ask if they have chicken bones or parts for sale. It will usually be backs and necks from chickens they cut up. They all work, as long as there are bones. While chicken feet are creepy your broth will be like jello.

One more note on bones - After I roast whole chickens, I strip of most of the meat for other uses like soups, stews, chili, enchiladas, salads or tacos, but save the bodies and freeze them. When I get about 5 frozen bodies (plus I add chicken feet), I make broth. Great way to really use the whole chicken and not waste anything. The broth is not as clear, but it tastes great and is thrifty.

To prepare your chicken, rinse and remove as much skin and any extra fat as possible. That means less skimming and fat at the end. If using a whole chicken, you’ll need to cut it up into pieces. Follow the photos. Use a sharp French or chef’s knife or a cleaver.

How to Cut Up a Whole Chicken

Lastly, cut what is left of the body in half crosswise. You will end up with twelve pieces. After cutting up raw poultry, immediately wash and sanitize your tools.

What is That Scum?

The brownish, foamy scum that appears when you first begin to simmer your broth is impurities being released. Skim if off and discard every few minutes until it’s gone. Skim, skim, for a good clear broth.

Add Aromatics and Skip the Salt

Next, add your aromatics and herbs. I add carrots, onion, celery (all organic), a dried bay leaf or two, black peppercorns, fresh parsley and thyme sprigs. What don’t I add? Salt. Skipping salt allows you to add the right amount of salt in your final dish to meet your tastes.

A no sodium broth is also good for people with sodium restrictions. And be sure to add 1-2 tablespoons of apple cider vinegar. It helps the pull the nutrients from the bones.  Bragg raw apple cider vinegar is a good choice as its unfiltered and unpasteurized.

As your broth simmers over a few hours, the water level will drop. I keep an electric tea kettle of hot water going and add water as needed. Don't worry, it won't dilute the broth.

Keep it at a Simmer

Never cook your broth above a low simmer. If you boil or stir it your broth will be cloudy. Just let it happily bubble away, filling your house with heady fragrance.

On Bones and Bone Broth

Articles about the healing benefits of bone broth are everywhere. Bones are important because they contain collagen protein. That’s what gives the broth body, flavor, richness and health-giving properties.

When you simmer your broth for long periods, the collagen and minerals break down and release into the broth. When cooled, good broth will be wiggly like gelatin. That’s because of the collagen.

I simmer my broth for 20+ hours to extract as much collagen and nutritious minerals from the bones as possible.

At the end of simmering, your homemade chicken broth will be deep golden and clear. Carefully strain out the spent bones, meat, vegetables and herbs. Discard them, as they have given their best to your broth.

Place the strained broth in a large stainless steel bowl or another pot and place it in a sink of ice water. This will help it cool quickly. To speed the cooling, place a trivet under the bowl or pot for ice water circulation. Stir occasionally until it’s cool.

From there, refrigerate overnight (covered) and skim the solidified fat off the top in the morning. Use your chicken broth within three days or freeze in portions. Freeze in muffin tins for small measures, canning jars, mason jars, and larger containers.

Measure it out, label (masking tape or kitchen labels and a Sharpie should always be in the kitchen) and freeze for up to three months. I freeze in 3 cup, 1 cup and ½ cup portions.

A Note for Histamine Intolerance

Because of the long simmer time of the bone broth, it may cause flare ups for people with HIT or MCAS. After you are healed and managing, you might be able to enjoy this. I do and I have both HIT and MCAS. For a 2-hour, low histamine chicken broth made in the Instant Pot try this recipe. 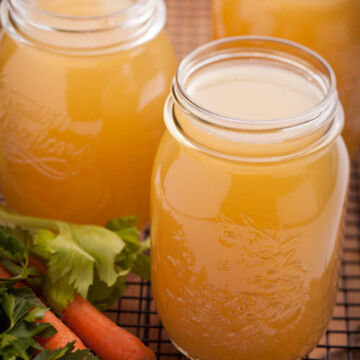 Sally Cameron
Like most things homemade, making your own chicken broth is so much better than store bought. Although the simmer time is 12-24 hours, it’s easy and mostly hands-off. The longer the simmer the more gelatinous your broth will be. I keep containers in my freezer for soups, stews, sauces, risottos and many uses.  See notes below for a bigger batch. While the chicken feet are creepy, they give the broth a gelatinous texture which is good collagen.
5 from 1 vote
Print Recipe Pin Recipe
Prep Time 20 mins
Cook Time 20 hrs
Cooling 1 hr
Total Time 21 hrs 20 mins
Course Soup
Cuisine American
Servings 16 Yield 4 quarts
Calories 7 kcal

How to Cut up a Whole Chicken

Strain and Chill the Broth

I let my chicken broth simmer for 20-24 hours. As the water level drops, add hot water from a boiling tea kettle to bring it back up. It won’t dilute it. The broth comes out gloriously rich and golden. Any questions, please use the comment section. For extra rich, gelatinous broth with lots of collagen I use approximately 5 pounds of chicken pieces or 4-5 roasted saved bodies and add 1-2 pounds of chicken feet. While they are creepy looking they are a great source of collagen.