Crisp, golden and lightly crusted: baked Parmesan potato wedges. Serve them for dinner along side roast chicken or for weekend breakfast or brunch. Cook potatoes a day ahead to save time.

It is said necessity is the mother of invention, and that works for recipes too. With a couple of large gold potatoes in the pantry that needed to be used, I decided to simmer them whole until tender and then put them in the fridge. That way they were at least cooked, but what to do with them? Potato salad? While I love it, Kent does not, so I had to come up with something else. The result? These crusty baked Parmesan potatoes.

With golden yellow flesh and thin skin, Yukon golds were developed in Canada from a cross between a North American white potato and a wild South American yellow-fleshed potato.

Choose large-sized potatoes for this recipe. Cover potatoes with cold water and simmer until tender when pierced with the tip of a sharp paring knife or when you can stick a fine metal skewer through. Drain potatoes, cool and refrigerate until chilled.

When ready to eat, slice the potatoes cross-wise into wedges about ½″ thick. Lay wedges flat on a parchment lined baking sheet, drizzle with olive oil and sprinkle with salt, pepper and granulated garlic, then a sprinkle of grated Parmesan cheese. Bake or broil until a golden, crisp crust is formed. To serve sprinkle with chopped chives. 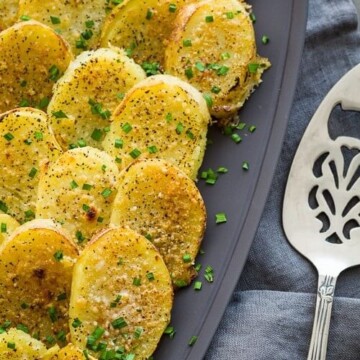 Sally Cameron
Crisp, golden potato wedges baked with Parmesan are delicious for breakfast, brunch or dinner. Cook the potatoes ahead and bake them when you are ready to eat.
No ratings yet
Print Recipe Pin Recipe
Servings 4

Tried this recipe?Let us know how it was!
« Spiced Coconut Mango Smoothie
Huevos Rancheros and the Ojai Valley Inn »