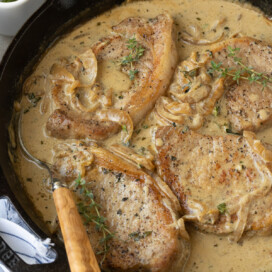 No more dry as cardboard pork chops with this sour cream pork chops recipe for juicy, tender chops. For a flavorful dinner tonight, make chops that the whole family will enjoy. It might just become your next family favorite. The sauce is smooth and creamy with caramelized onions, garlic and herbs and the secret ingredient switch? Using French-style sour cream called creme fraiche instead of sour cream. Read on to find out why.

Why use creme fraiche instead of sour cream? Because of the higher fat content. Creme fraiche has twice the fat of traditional sour cream. Unlike sour cream, it won't curdle in sauces or soups and brings richness to simple recipes. Look for it near the sour cream in the refrigerated dairy section. It makes a terrific sour cream gravy.

Many people don't like dealing with bones, so I went with a boneless cut of pork chops for this recipe. If you prefer to use bone-in pork chops, this recipe still works. Be sure they fit in the pan with the bones. Bones give flavor and moisture to meat, but you'll find with the cooking method of this recipe (called braising), you get the best pork chops that are moist not dry.

Buy pork chops that are 1-inch thick. If they are super thick (2-inches) slice them in half for 1-inch chops, or have the butcher do it for you. If you use thicker chops, they will work, but the cooking time will be a few minutes longer.

For four chops, use a 10-inch cast iron skillet and a lid. I like glass lids because you can see through them. For a large family, you'll need a larger pan. Try a Lodge 12" or 15", or for a terrific investment piece, look at this enamel coated cast iron braiser (I love mine). It has a wide base for a lot of cooking area.

After slicing onions and chopping the garlic and herbs, season pork chops with salt and pepper on both sides. Next, brown pork chops in a hot cast iron over medium heat with the olive oil. Sear the top side until golden brown, just a few minutes. Remove the chops and any pan drippings to a plate or small rimmed baking sheet and keep warm.

Add the butter to the pan and cook the sliced onions until golden brown, then add the garlic and cook briefly. Whisk together the broth, creme fraiche, herbs, and Dijon (if using) and add broth mixture to the onions.

Simmer into a thickened creamy sauce (no corn starch needed), then place browned chops and meat juices back into the pan in a single layer. Cover and simmer until pork is done, 7-10 minutes. To serve, pour sauce and onions over the top of the pork chops onto plates.

Cook the pork chops to an internal temperature of 145°F. Measure with an instant read thermometer and don't overcook them. Measure temperature early versus late to not overcook.

If you follow a low carb or keto diet, this recipe will work for you. It has 6 grams carbs per serving and 21 grams of fat.

Sour cream pork chops work well with a simple side vegetable like 5 minute green beans or easy broccolini. And to go with that terrific sauce, mashed potatoes are hard to beat! Also delicious are fluffy white rice, egg noodles, or brown rice pasta (like farfalle) for gluten-free work well too.

If you'd like to change this up a bit, here are a few variations:

Other Ways to Use Creme Fraiche

Store any leftovers in an airtight container for 3-4 days. Be sure to label and date.

Leftovers reheat well. Use your oven. Place the chops in a small glass dish and add the leftover sauce. If no sauce, add a little broth, 1-2 tablespoons. Cover tightly with foil and heat for about 30 minutes.

Why are my pork chops always tough and dry?

Pork chops are lean protein, so it's easy to over-cook them, so watch your timing. The sauce in this recipe keeps them moist and flavorful. Thin chops cook faster than thick ones. Test with a digital thermometer. The perfect temperature is (145°F).

Can pork chops be a little pink in the middle?

A little pink is ok. Rather than guess whether they are properly cooked, use a digital thermometer and cook until they reach 145°F (the safe temperature).

Should you rinse pork chops before cooking?

No. Washing raw poultry, beef, pork, lamb or veal before cooking it is not recommended. That just spreads and bacteria to other surfaces. Cooking to the proper temperature makes them safe.

I developed this recipe for 1-inch to 1 ½-inch thick boneless pork chops. If yours are thicker, say 2-inches, they will take a couple of minutes longer. Take them to 145°F as measured with a digital thermometer.  Do not try to substitute regular sour cream for creme fraiche. It will curdle the sauce because it is lower in fat.