Some subjects in the world of cooking that elicit firm convictions about how they should be made, like mashed potatoes.Russet potatoes or gold, and what about tools? A hand masher, ricer, or hand mixer? Skin on or off? Chunky or smooth? Milk, half and half, with dairy or without for vegan style? These are serious matters for mashed potato lovers. Here is my recipe for sour cream mashed potatoes. 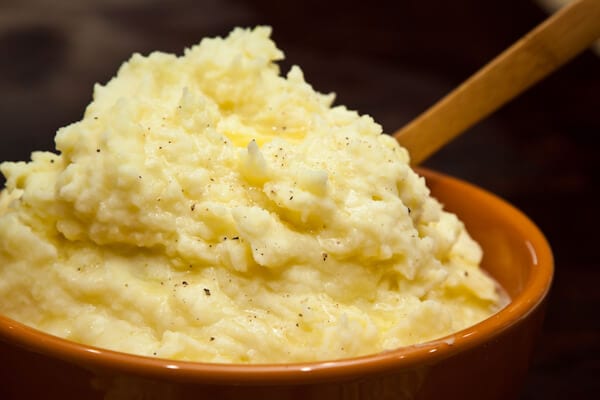 Mom used an electric hand mixer to whip up mashed potatoes. Many cooks consider a hand mixer heresy and insist that you will get gummy mashed potatoes. Mom’s were always perfect, light and fluffy. She also used only russet potatoes, valued for their high starch content and hence fluffy mashed potato result. As I began cooking on my own I tried new tools and experimented with other potatoes.

Today, I use a tool called a ricer. A ricer pushes softly cooked spuds through a hopper with holes to yield fluffy grains of potatoes ready to be stirred with butter, dairy of choice, and whatever else you like to include (sour cream, horseradish, chives, herbs or nothing at all). 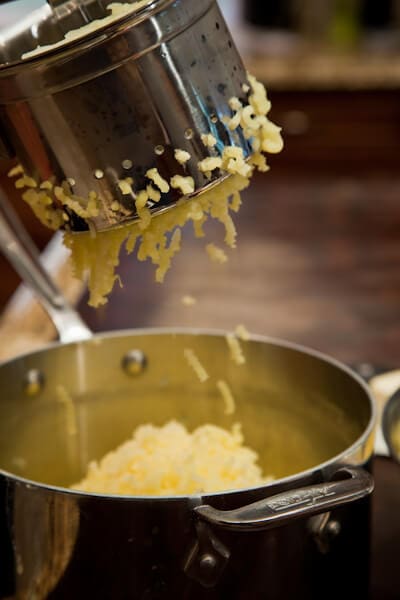 When planning how much to make figure a 6-8 ounces of potatoes per person. For the liquid portion I use milk or half and half (for the holidays). Other additions are sour cream, butter, salt and white pepper. Sometimes I add finely chopped chives for color and nice visual appeal or some horseradish for a kick of heat and extra flavor.

For vegan mashed potatoes, use almond or rice milk and use vegan sour cream.  Add enough to get to the texture you desire. I use the brand Follow Your Heart. It has a nice tang like dairy sour cream. For the butter, I substitute Earth Balance vegan buttery sticks. You’d never guess this version is dairy free.

I prefer medium-starch, Yukon Gold potatoes for their creamy texture. Don’t use red potatoes (low starch) or other thin white skinned potatoes that have a more waxy consistency. They are best for roasting and dishes where the potatoes need to hold together like potato salad. When cooking your potatoes, cook them until they are very soft so they are easier to push through the ricer. No gold potatoes? Russet work fine (in fact I’m backing to preferring them).

To Make Mashed Potatoes Ahead of Time

You can make mashed potatoes an hour or two head of time. Keep them warm in a slow cooker if you are making a big quantity for a crowd or place mashed potatoes in a metal bowl atop a pan with simmering water. Cover the bowl with plastic film then a kitchen towel.

If potatoes have stiffened up while siting, whip in a little hot milk, or a hot milk and melted butter combination. You can also make them a day ahead and heat them back up in a large pan while whisking in more hot milk and butter until they reach the consistency you prefer. 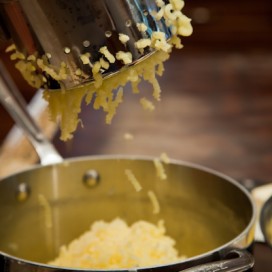 For light, creamy, fluffy mashed potatoes, use a ricer. If you want them to be over-the-top delicious for a special occasion or holiday, use white truffle butter. If you need to make a really big batch, make them an hour or so ahead of time and keep warm in a slow-cooker or in a bowl seated atop a water bath. For a dairy-free version, use vegan sour cream and vegan “butter”. See the brands I use in the post above.
Servings 6
Calories 173kcal