Grain-free, gluten-free, and almost like a cookie, here is a basic tart crust recipe that will work for many fillings. Press the almond coconut tart crust mix into a tart pan with your fingers, bake and fill. If you have not made a crust like this, it is easy. It takes about 10-12 minutes to assemble plus baking time. Tomorrow I will have the filling recipe out for my spiced pumpkin tart, just in time for Thanksgiving. 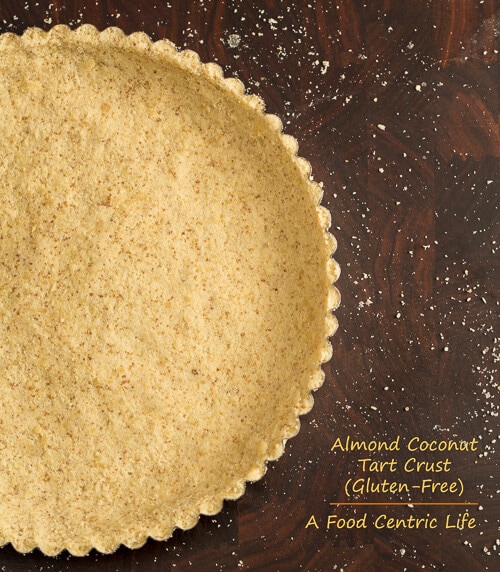 As I began menu planning for Thanksgiving, I realized that going gluten and wheat free was going to cause some unexpected changes. I had some recipe revamping to do. A tart crust made with graham crackers or anything wheat-based would just not work any more. The best alternative? Combining almond flour and coconut flour for a cookie-like crust.

For the almond flour, use  blanched almond flour. Almond flour is lighter in color and finer than natural almond meal, which is darker colored and coarser in texture. I use Bob’s Red Mill . 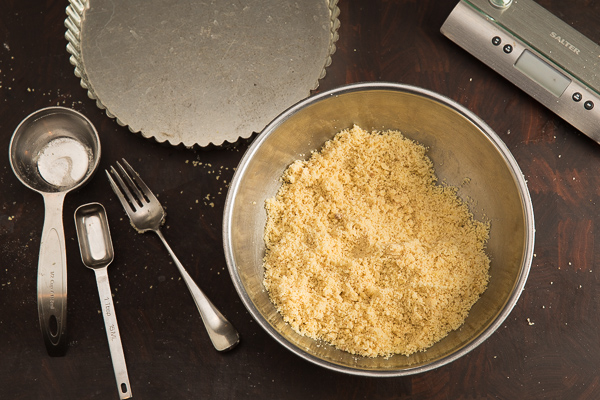 Mix the Tart Base

In a medium bowl, mix the two flours and sugar together with a fork. I tested this recipe with both organic raw coconut sugar and organic light brown sugar, then mix in the melted butter. When the mix looks evenly combined, squeeze a handful together. It should hold, like in the photo below. The crust mix should feel moist. 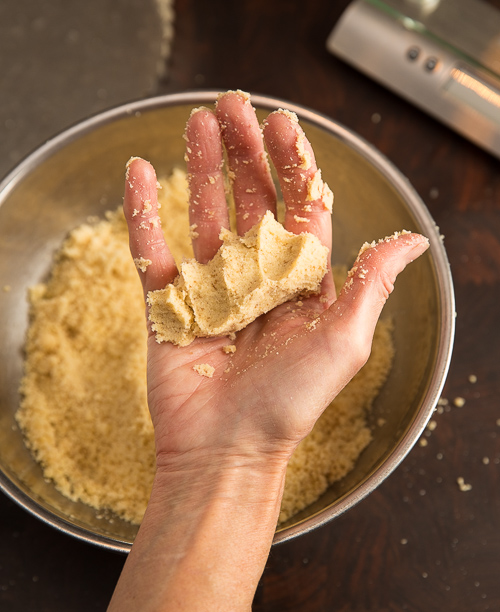 You will need a 9 1/2″ light metal tart pan with a removable bottom. When creating your tart shell, fuss a bit and take your time. It take about 10-12 minutes to assemble.  The time you take to make the crust perfect will be worth it. Pour the crust mix into the tart pan, distributing it evenly with your fingers. Work on the crust edge first. You want to create a strong, even edge. 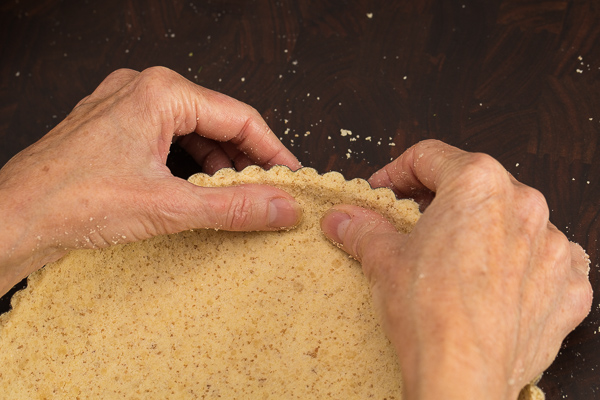 Push and pinch the crust mix into the edge of the tart pan with your fingers and thumbs. Work to build it up in layers and keep moving around the tart pan. It takes a little time. Keep working it. A nice sturdy edge will give strength to the tart when you cut it. When you have a nice strong edge, pat the rest firmly into the bottom of the tart pan for the base. 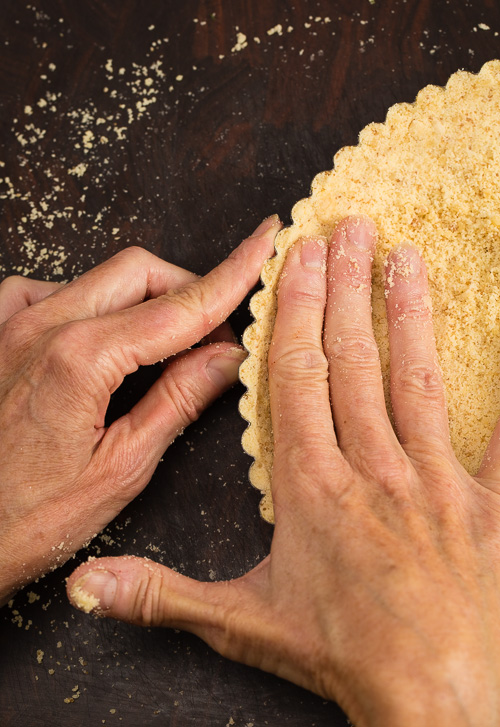 When you have created your crust, smile at the beautiful tart shell you’ve just created, then bake it. The work will be worth it! Place the tart pan on a baking sheet for support to bake. I use a rimmed half-sheet baking pan and place a Silpat liner under it so it does not slide around. If you have one great. If not, just handle it carefully.

Bake the tart crust in a 350° oven for approximately 12-14 minutes. Timing will vary with ovens. You want it to be a light golden brown. Remove and cool. Use with your filling of choice.

Tomorrow I will post my spiced pumpkin filling for Thanksgiving, so you can delight your family with a wonderful gluten-free, grain-free pumpkin tart for dessert. 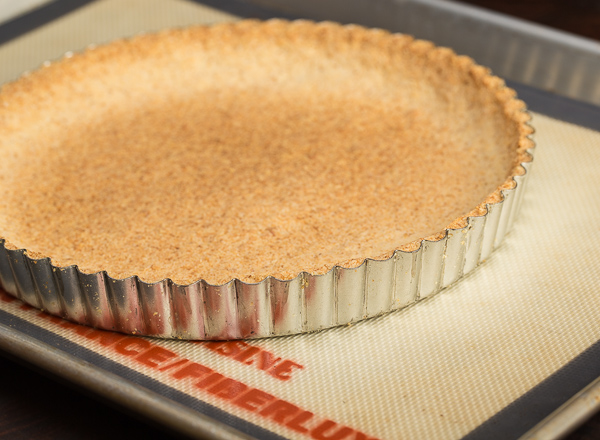 Half-sheet and quarter-sheet rimmed baking sheets (or pans) are one of my top tools. They are sometimes called jelly roll pans because the have a raised edge, not flat, like a cookie sheet.

Jelly roll pans may have slightly different dimensions. As this tart is 9 1/2″, either should work. I use the real half-sheet size of 13″x 18″. Buy them online from Amazon. I have included a link here. You can also buy them at a restaurant supply store or a place like Bed, Bath & Beyond. Check around.

Whatever you buy, make sure they are heavy, not cheap and flimsy. Heavy duty ones stand up to use without warping. Cheap ones warp. That is why I included the link above. The manufacturer is Vollrath, also called Wear-Ever. They are more expensive but they will not warp, and they will last longer. There are other brands too, just be sure they are heavy duty.

In the photo, a silicone sheet lines the baking sheet. It prevents the tart crust from sliding around as well as protects it from the direct heat of the oven being in contact with the tart pan. It is optional, but nice to have. You will find Artisan and Silpat on Amazon. You can also find them at stores like Bed, Bath & Beyond.

Recipes That Use Almond Coconut Crust

Here are the recipes I have made so far using this crust recipe. Both sweet and savory. More to come!

Note for a Savory Tart Crust

If you want to make a savory (not sweet) crust, please read my post for the cherry tomato tart and the crust adjustments. I eliminated the sugar, added an egg yolk. 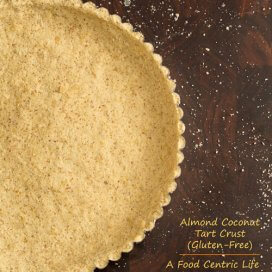 Using almond flour and coconut flour, this tart crust or pie crust is wheat-free and gluten-free. Fill with the spiced pumpkin filling and bake for a wonderful finale to your Thanksgiving dinner. For a savory tart crust check the Cherry Tomato Tart recipe post.
Servings 1 crust (about 8 servings)