Arsenic is a naturally occurring element found in soil and water. While it's natural it's not safe. In fact arsenic is a notorious toxin. While rice grows in water flooded paddy's, it absorbs arsenic from the ground and water.

Different kinds of rice and areas of the world produce rice with varying levels of arsenic. While arsenic is in the earth's crust, banned farming practices and industrial usage are more to blame for the contamination.

Because arsenic is a confirmed carcinogen, it's best to reduce exposure whenever possible. It's not just in rice, but in rice products and foods such as:

If you want to read more, check out the links at the end of this post. So how do you cook rice to reduce arsenic levels? It's really very simple: cook it like pasta.

How to Reduce Arsenic

While many people forgo eating rice for a low-carb or grain-free diet, rice is one of the world's most widely consumed and important grains. With high arsenic levels and rice consumption what it is, this is a world-wide concern.

Because I've had heavy metals toxicity with unsafe levels of mercury, cadmium, lead and arsenic in my system, my concern climbed when I read reports about high arsenic in rice. It can also be a source of lead and chromium.

I didn't want to give up rice, so I started cooking it like pasta.

Cooking rice like pasta reduces arsenic as it releases into the cooking water and drains off after cooking because arsenic is water soluble. If you cook rice the traditional way with approximately a 2:1 ratio of water to rice, the arsenic stays in the rice. It's actually easier because there is no measuring and the rice comes out perfectly. Remember, this is more important for brown rice than white.

To rinse or not to rinse? Yes. It's a good idea to rinse your rice well in cold water before cooking. If you have a sprayer attachment, that's is what I do. If you buy from bulk bins rinsing removes possible dust, unwanted material, and some of the starch.

Some articles mention soaking it over night, but I don't. If you do soak it might reduce the amount of time you cook the rice. Test and see for yourself.

Unfortunately rinsing does not have much of an effect on arsenic levels. It's how you cook it, and neither does whether it is organic or not.

Bring a large pot (7-8 quarts) of water to a boil. Add a little salt and pour in a 1 pound bag of rice. A pound of rice yields about 10 standard servings (not crazy restaurant sized).

Cook rice for the time recommended on the package and then drain off the water. Optionally, place the rice back into the pot on top of the warm stove and allow to steam dry for a few minutes.

Either eat rice hot or spread the drained rice flat on a rimmed half sheet pan and cool, then portion and freeze (a great prep ahead step). I freeze it in 1 cup portions for two servings. I always cook both brown rice this way.

As white rice is naturally lower in arsenic due to the polishing off of the outer surface at processing (but lower in fiber and nutrients), I usually cook white rice the standard way on the package, but use the pasta method as well.

Rice grown in the Southern USA reported higher arsenic levels, probably because many of the fields were once used to grow cotton with arsenic pesticide use. Rice grown in California has lower levels, so I always buy California grown rice. Lundberg Farms is my favorite.

Arsenic concentrates in the outer part of the grain called the bran. The bran is why brown rice is brown and more nutritious. The bran (fiber) and germ (nutrients) are polished off to produce white rice leaving nothing but the starchy endosperm.

Without the bran and germ, white rice has lower levels of arsenic. It cooks faster and is easier to digest than brown rice, but it also has a higher glycemic index and load.

If you love rice like we do, ever make risotto? Try this risotto Milanese. And here is the best rice to use.

If you suffer with histamine intolerance (HIT), rice is generally considered a safe food. 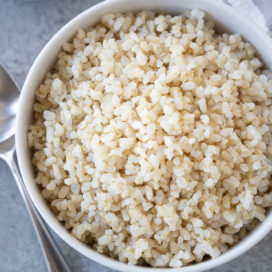 How to Reduce Arsenic in Rice (through cooking)